Honey bees live together as a colony. Every colony is made of two female castes and one male. In the spring, a 3 lbs. package of honey bees (about 10,000) will be installed. A colony’s peak population will be reached in early summer with as many as 60,000 or more worker bees. 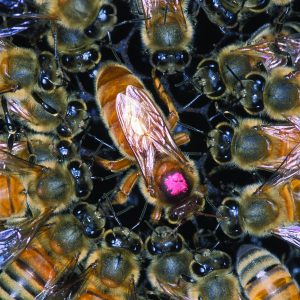 Some bee packages may include a marked queen, making her easier to identify during hive inspections.

The Queen– At the peak of the social ladder in a colony is a solitary ruler, the queen bee. She is the longest in length of any bee in the colony and the lone egg producer. Hive genetic traits are her responsibility, and queen bees need to be of superior stock to optimize desirable colony characteristics. An ideal queen will be docile in temperament, hardy, and disease and mite resistant, will promote productiveness and support cleanliness. A strong queen can expect to live two to five years. 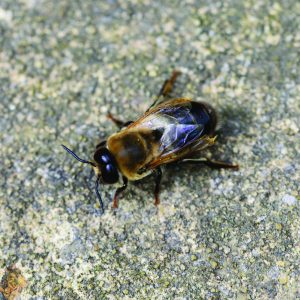 Drones appear chunkier than the queen or worker bees.

The Drones– Male honey bees are known as drones. Drones may be mistaken for a queen bee due to similarity in their size. However, a drone’s abdomen is rounded and chunky where a queen’s is tapered. Also, drones do not have stingers. A drone’s only known function is to mate with the queen, although they have been known to move their wings to assist in cooling or heating the hive. If a drone is considered “lucky” enough to mate, he dies soon after. A typical summer colony may have around 200 drones. Drones that do not mate will have outlived their stay during times of dearth, usually in the fall. They are evicted from the hive by the workers and die of exposure or starvation. A typical drone’s lifespan ranges from 2 to 8 weeks. 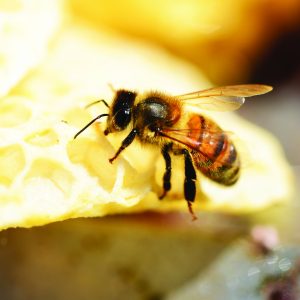 The Workers– Worker bees are all females and, as daughters to the queen, are all sisters. They are the backbone of the hive and fulfill all the duties not done by the queen or drones. These duties include cleaning cells, tending to pupae and larva, producing wax, transporting food, guarding the hive entrance, and foraging for nectar, pollen and water. In spring and summer, worker bees will typically live 15 to 40 days, while a fall or winter bee might live as long as six months.