I sometimes get the impression that beekeeping, for me anyways, is a huge lesson in patience. This week was no different. After the installation of my two bee packages, I found myself always wondering about how it was going for them in the hives. The strain of waiting a week before I’d check on their progress was starting to wear on me, and by Saturday I was giddy to finally crack open the hives and get down to my first inspection.

The first hive I opened up that evening was Queen Beatrice’s. She was installed in the hive with all natural colored foundation. I can’t tell you how fascinated I was with the bees and all the hard work they had done in just a week. I would say that around 30 to 35% of the foundation was drawn out with comb. I fleetingly spotted Beatrice and several drones within the hive population, though I will admit I could simply not see any eggs. Later, upon further inspections of the photographs taken, I was able to see them, just not with the naked eye on the natural foundation during inspection.

Busy doing what bees do…

Onto the second hive: Queen Maude’s with the black foundation installed in the brood box. When comparing Maude to Beatrice I would say so far that Maude has proven herself to be the more docile of the two. Her hive is a little more relaxed (though I wouldn’t classify either hive as anything close to aggressive). Upon inspection of Maude’s kingdom, I found about 25% of the foundation drawn out with comb. Maude poked her head out between frames only to dismiss me with a swish of her backside. I saw only one or two drones, a few less than in the Beatrice’s hive.

What I was really excited about in Maude’s hive was spotting the eggs. Not only were they much easier to spot within the black foundation, I could actually get a gauge of how many of the cells actually had them. All I can say is that Maude has been a very busy lady! 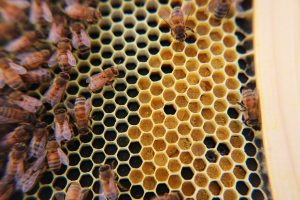 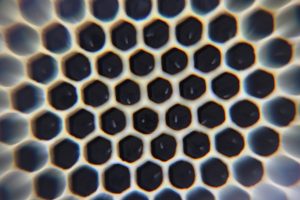 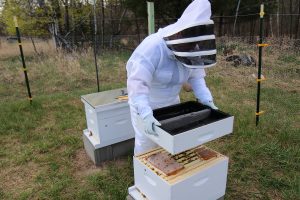 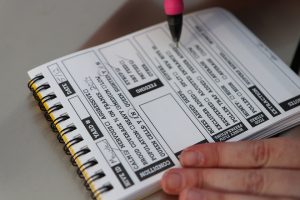 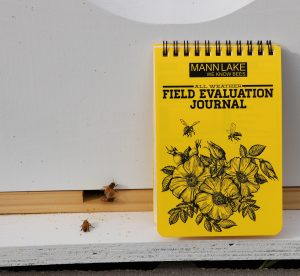 Bee approved Field Evaluation Journal.           An evening at the hives isn’t complete with out a little bookwork.

After the inspection of the frames in each hive I added on another pollen patty and refilled the top feeders. Spring is really bursting forth with plants starting to bloom and pollen filling the air. I’m hoping that soon it will be enough for the girls to go without their feeder. Patience; all in due time.

Now that I had fully finished up with the official first hive inspection, it’s time to put in some bookwork. I thought it would be extremely helpful to do some recordkeeping, not only to look back upon in the future to problem solve but also to use as a learning tool. I recently got a Field Evaluation Journal and decided this would be a simple way to record each inspection.

All in all, I’d say the hives are doing wonderfully and with no sign of disease. The Queens are laying and the bees are drawing out comb and stashing honey and pollen. Both hives were calm and easy to work with.

The rush of opening the hives and seeing all the happenings of those little beauties was satisfying. I’ve been a beekeeper for only a short time, but I think I’m already beginning to follow the ‘head over heels’ path more and more. I think I’ll stop rambling on now… I’ve got a comfy bench with a great view of the bee yard that is calling my name!

We’re best friends now, high five! Or should I say ‘Hive Five?’ I’ll show myself out.