Honey bees are natural pollinators, carrying pollen from plant to plant as they go about their day. While this is immensely beneficial to the environment, it’s also crucial to the colony’s productivity and success. Honey bees gather pollen to help feed the colony, especially the young larvae.

Because pollen plays such a crucial role in the life of honey bees, they need to be able to collect and transport it efficiently. Learn more about how honey bees collect pollen with this overview.

Why Do Bees Collect Pollen?

Bees are considered the single most important pollinator species on the planet. But before they perform their role in the ecosystem, they collect pollen primarily for their benefit.

Bees collect pollen and nectar simply because those are their primary food source. Bees have more or less the same nutritional requirements as humans. They need proteins, carbohydrates, minerals, fats, vitamins, and, of course, water to survive.

For any bee colony to survive, they forage for nectar, pollen, and water. The nectar provides bees with energy, while the pollen supplies their tiny bodies with essential protein and nutrients to thrive.

Pollen is also what they feed to the larvae within the colony.

Bees get all the nectar and pollen they need from flowers. The nectar that they process turns into honey. Bees consume their own honey and store any excess in the honeycomb to ensure the whole hive has sufficient food source throughout the winter.

As a honey bee travels from flower to flower, the fur on its body picks up pollen. This pollen then travels with the bee and brushes off on the next flower, thus allowing the plants to pollinate. This is how bees still pollinate flowers even when they don’t forage for pollen. 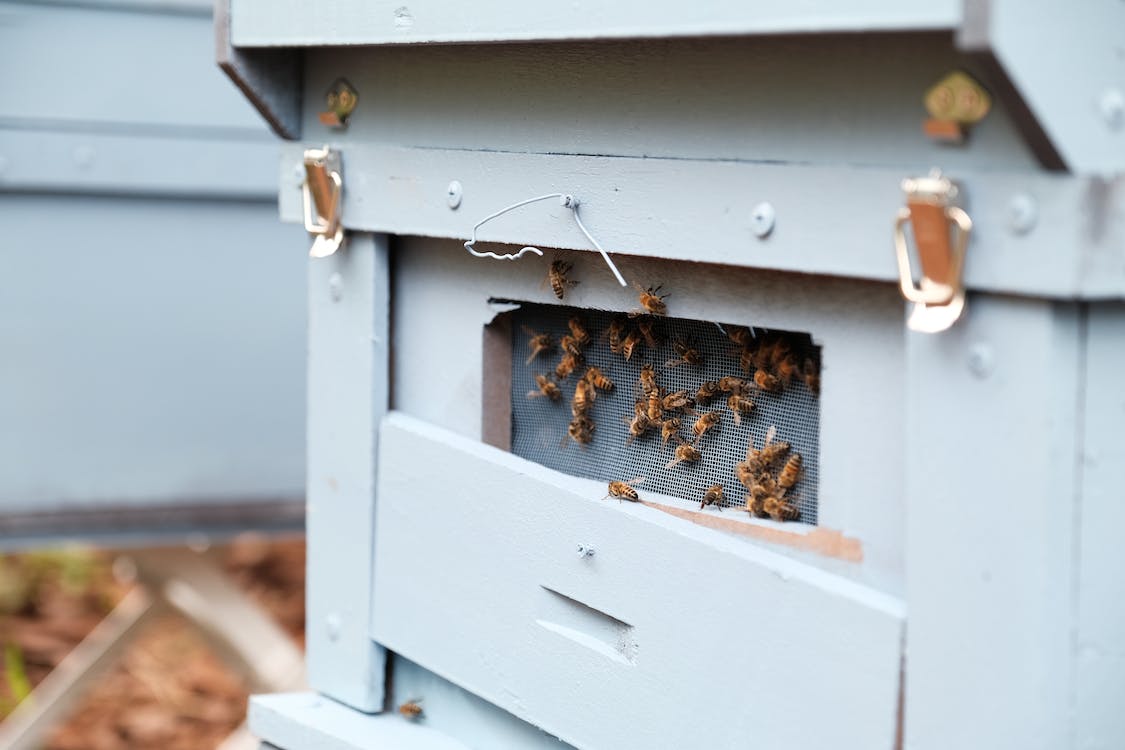 Bees can fly as far as 12 kilometers from their home hive, carrying pollen from plant to plant over long distances. However, if foraging for nectar and pollen, they usually limit their interests within a three-kilometer distance.

How Do Bees Collect Pollen?

We know bees carry pollen between flowers, but how do honey bees collect nectar and pollen for the hive?

There are many different ways to collect pollen. How bees collect their pollen depends on what type of bee they are.

Let’s get to know the different ways bees collect and carry pollen.

As a result, the bees become covered with pollen, sometimes even on their hairy eyes. The bees then wipe the pollen off their body using their hind or back legs. The stiff hairs found on a bee’s abdomen are called scopa, but the ones on the hind legs are called corbiculae or pollen baskets.

All honey bees collect pollen in this manner.

Bees Collect Pollen on Their Abdomen

Bees of the Megachilidae family, which includes leafcutter bees, mason bees, resin, and carder bees, all carry and transport pollen using the long scopal hairs located on their abdomen. 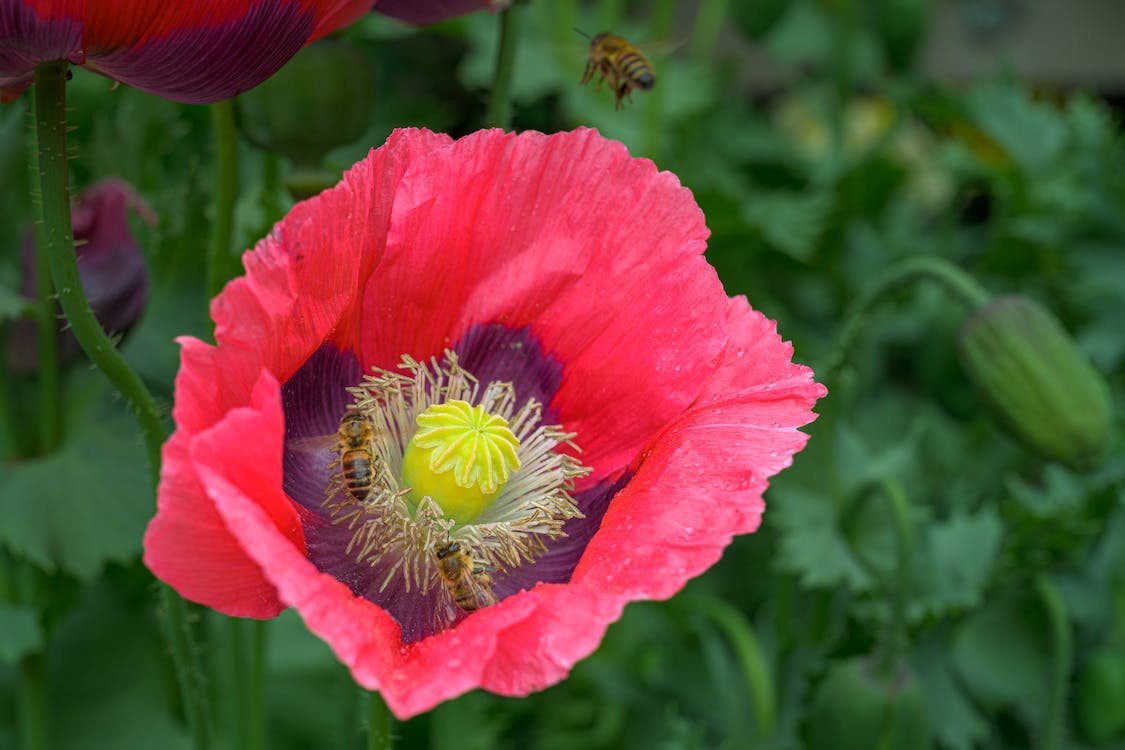 As a bee collects nectar and pollen from flower to flower, pollen pellets from one flower inevitably get transferred to another. This aids the process of pollination, which is essential for the survival of life on the planet.

The process starts much the same: as a honey bee flies between flowers and pollen sticks to the hairs on its body. This time, instead of letting the pollen transfer to the next flower it visits, the bee uses its legs to brush the pollen toward its hind legs.

Here, stiff hairs called corbiculae, or pollen baskets, collect and hold the pollen. When these pollen baskets are full, the bee returns to the hive to store the pollen for larvae to eat later, then leaves the hive again for another trip.

Do All Bees Collect Pollen?

It’s important to note that not all bee species collect pollen. Some, like cuckoo bees, lack the physical characteristics that help other bee species forage and carry pollen.

Instead, these bees raid pollen-collecting bee colonies and deposit their eggs onto these nests. Once merged, the cuckoo bees eat the food stores in the host’s colony, sometimes killing off their hosts in the process.

How Much Pollen Do Bees Collect?

Every bee species varies in how much pollen it can collect and carry.

An average-sized honey bee colony can collect up to 18 kilograms of pollen and around 120 kilograms of nectar annually.

Collecting pollen generally takes up 15% to 30% of the time of the colony’s forager population. A single honey bee alone can carry pollen up to 35% of its body weight.

Like honey, bee colonies often have excess pollen that beekeepers can collect.

Individuals can sell bee pollen and use it as a health supplement, making it just one of the ways beekeepers can make money from their hives.

Do Bees Choose Their Flowers?

While other species of pollinators stick to a specific plant species or family, honey bees are less picky. They are polylectic pollinators, meaning they’ll visit a wide variety of flower types and colors when gathering resources.

They also choose pollen based on its odor and physical characteristics rather than its nutritional value. This means that they seek out the most attractive flowers in the area. And they collect quite a lot!

The flowers themselves have evolved their own signals to attract pollinators like bees and encourage them to come back. These flowering plants may produce certain fragrances or make their petals more colorful to make them more appealing to the bees.

It’s still unclear whether bees can gauge the nutritional content of the nectar they are collecting. Since most of the nectar that a bee collects ends up in the hive rather than being eaten on the spot, there’s still no hard scientific evidence on how the bees evaluate their nutritional value.

However, a bee’s overall choice of pollen depends on a wide variety of multisensory factors and not just the characteristic of the pollen itself. Bees show that they can learn from their previous experiences, which are a big part of their foraging choices. They also depend on information the rest of the colony relayed to find excellent nectar and pollen-extracting locations.

What Happens to the Pollen Bees Collect?

After the pollen is successfully harvested and brought back to the hive, the bees add some enzymes and acids to avoid spreading bacteria and other harmful microorganisms. The pollen is then prepared for long-term storage.

Pollen mixed with nectar or honey and bee saliva is called bee bread or ambrosia. This bee bread serves as the food for the worker bees and larvae. 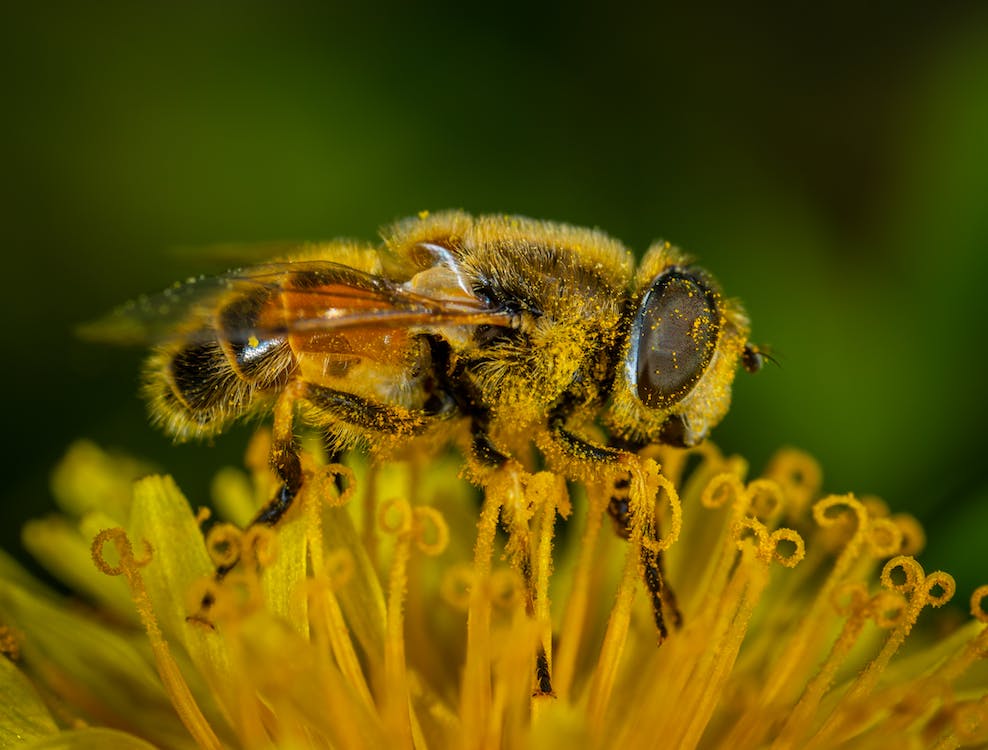 The short answer is yes. In fact, bee bread is often called ambrosia or “food of the gods” for many reasons.

Bee bread is one of the many reasons that people keep their own bees. Many people consume organic bee bread as part of their natural, well-balanced diet.

If you are interested in honey bees and everything else they do in their daily lives, visit Mann Lake to learn more, purchase bee kits and other supplies, and connect with other bee enthusiasts.