“Though she be but little, she is fierce!” –William Shakespeare, A Midsummer Night’s Dream

As the term ‘busy bees’ implies, bees are not idle critters. They truly are the creature that best embodies hard work and a bustling activity. Every time I go out to the bee yard, I am in awe of their productivity and progress, especially since a honeybee is not much bigger than my thumbnail. How does a person expect to see results from such a tiny thing?

To assume that these girls aren’t putting in some long hours and awesome team work would be an awful mistake. This was my thought this week as I realized it was time to add another brood box to the hive. At the time of adding the second brood box, I had the bees no more than 24 days. In less than a month these tiny creatures had put in so much work that they were at risk of outgrowing their current space. Jaw drop!

The process was a pretty simple one, but none the less I still felt a sense of pride. The hives now with TWO brood boxes certainly cut a more impressive silhouette in the bee yard than before. Looking good, girls! Now let’s expand some more! 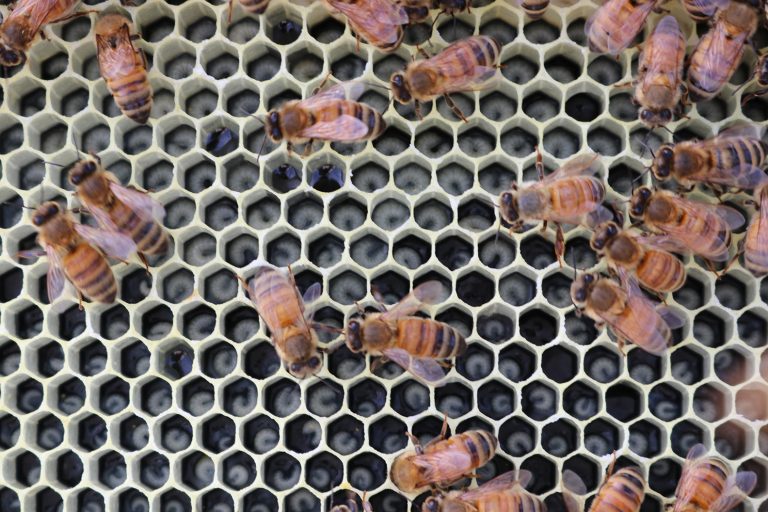 Walking away from my hives at the end of a successful inspection and box addition session, I was awash in a huge sense of pride. Not only are my bees alive, they are thriving. My ego (even though it was the bees who were doing most of the work) was huge. That was mistake number one. Mistake number two was thinking that just because I was out of the bee yard and headed to my vehicle, the ladies would not still be in defense mode.

The veil came off, and I didn’t think twice as I put away my tools. Of course I heard the telltale buzz but did not think it was a threat. Silly me! Though usually gentle creatures, it probably felt like I had just ransacked my bees’ homes. On top of that, we’ve had a weekend of 80+ degree temperatures. Who wouldn’t be a bit surly with no air conditioner in this heat?

Some loud buzzing below my left ear and then a surprising, fiery pinch on my neck was all it took to make me involuntarily yelp. A hand brought to my neck revealed the fierce little warrior who took on a giant to defend her hive. Lesson learned: Always respect the bees. They are normally gentle, but that does not mean they are complete pushovers. When provoked, they will do what is necessary.

Despite the sting, I’m still impressed. Now, I’m off to get some lawn work in the bee yard taken care of.