Every colony of honey bees relies on a queen bee to function and survive. But what exactly does the queen honey bee do, and what happens when a colony loses its queen? Learn more about the pivotal role of the queen bee and how she influences the hive’s growth and overall survival.

The Honey Bees’ Way of Life: How a Colony Works

What are worker bees?

What are drone bees?

During the spring and summer, several hundred drones hang around the hive. Drones are male bees and are slightly longer and stouter than worker bees. They can live up to 8 weeks; during that time, they regularly leave to fulfill their only role, which is to mate with the queen bee. Around fall, drones are kicked out of their hives and left to die.

What are queen bees?

There is only one queen bee in one colony. Being the only female in the colony with developed ovaries, she is considered a central figure within the hive.

With each bee type charged with a distinct role, they work together to exist and thrive. One group cannot survive on its own without the whole colony’s support. This is why a bee colony is sometimes called a “superorganism.”

What Work Does a Queen Bee Do?

Everyone’s heard of the queen bee. From her appearance to her role in the hive, she stands out from her fellow bees.

A honeybee queen is the largest bee in her colony—she’s usually around twice as long as a worker bee. Although a colony has hundreds of drones and thousands of worker bees, there is only one queen. She’s the focal point of a beehive, tasked with maintaining the population and keeping the colony healthy and buzzing.

That said, the primary role of the queen is laying eggs. However, there are also many misconceptions about honey bee queens. For example, she doesn’t technically rule the colony or decide when to raise a new queen.

Scientists and beekeepers are always learning more about the life of a queen bee and honey bees in general. If you’re wondering what honey bee queens do and their role in the hive, learn more with this guide.

The Birth of a Monarch

A queen honey bee’s life starts when the hive needs a new queen. This might happen for several reasons. The old queen might die unexpectedly or lay fewer eggs due to old age. The colony might also outgrow its hive, in which case the colony splits in half, and a new queen takes over half the population.

Whatever the reason, a hive can’t survive long without its queen. Raising a new queen bee is one of the most important tasks a honey bee colony can undertake.

Preparing for the Queen

Nurse bees feed these eggs royal jelly throughout their development. While all larvae feast on a diet of royal jelly for the first few days of their lives, worker bee larvae eventually switch to a diet of honey, pollen, and bee bread. 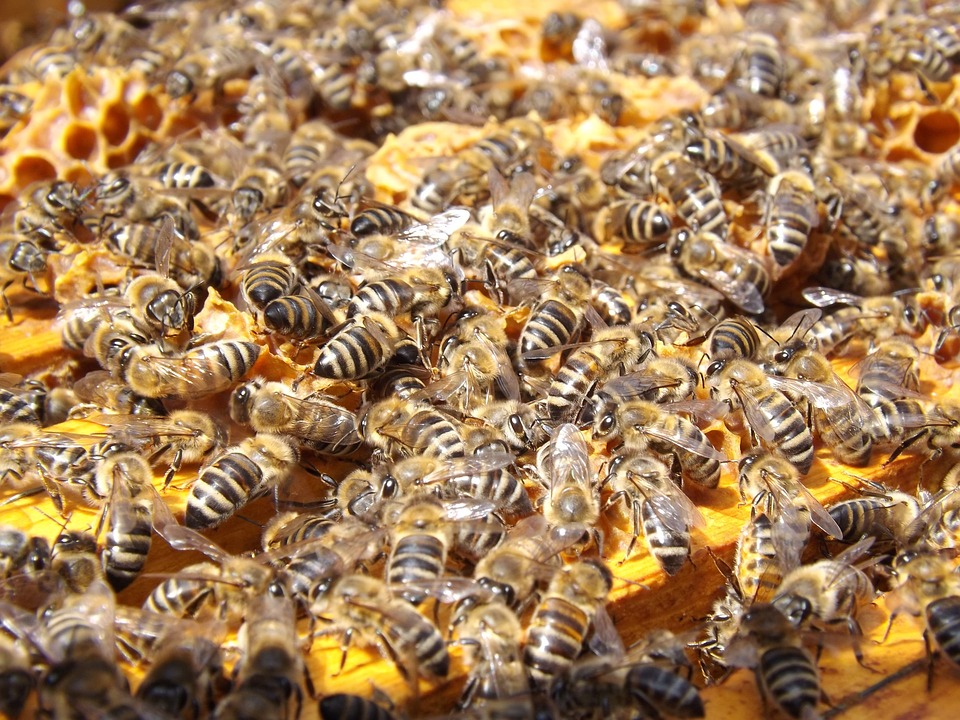 This royal jelly diet allows queens to develop differently from their fellow bees, with larger bodies, different reproductive systems, and a smooth stinger that can sting more than once without killing the queen.

One Queen to Rule Them All

By choosing a few eggs to be queens, the hive has a better chance of raising a strong and healthy queen. However, only one queen can exist in a hive. As a result, a newly hatched queen will kill the competition by stinging the other larvae while they’re still in their queen cells.

If two queen cells hatch at the same time, they fight until only one remains—the colony’s new queen.

Once she hatches and matures, the primary role of the queen is laying eggs throughout her lifetime (up to 5 years). In her most productive seasons, a queen can lay up to 2,000 eggs every day. This is what makes her so dear to the colony.

A healthy queen maintains a colony’s population and ensures there are enough worker bees to provide for and protect the colony all year round.

A honey bee queen is the only female in the colony that can lay fertilized eggs. To do this, she goes on a mating flight.

Shortly after hatching and defeating her competition, the queen leaves the hive and flies to a drone congregation site, where thousands of drones have gathered to mate with a queen.

At these sites, the queen mates with up to 20 drones and stores enough sperm to fertilize millions of eggs throughout her lifetime. Each queen bee mate dies quickly after mating as the endophallus gets ripped off their abdomen. The male honey bee drones that unsuccessfully mate with the queen bee are also eventually evicted from their hives and die. 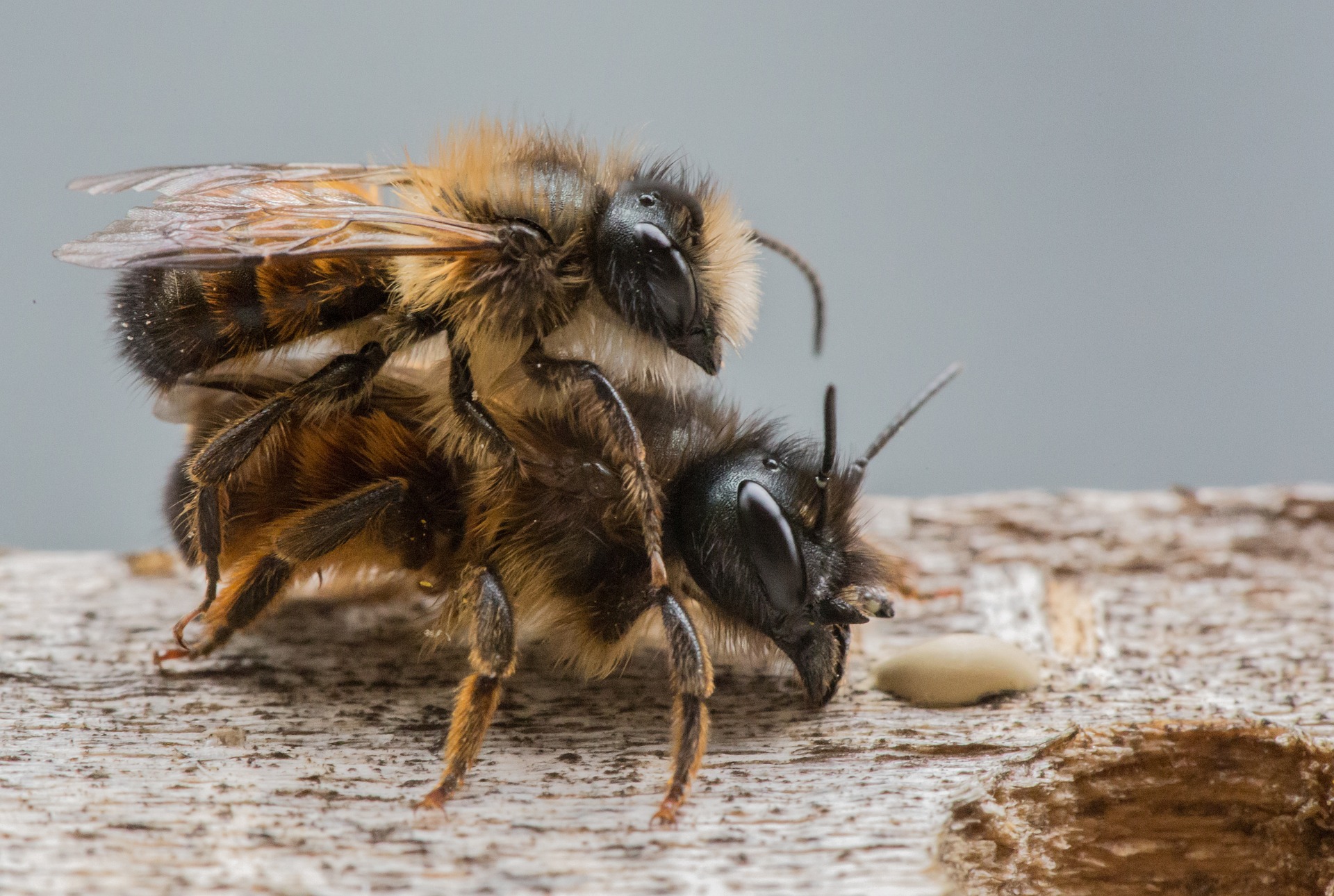 During these nuptial flights, the queen bee also has to fight off queen bees from other hives who emerged to mate.

After the mating flight, the mated queen returns to her colony and begins her duties as the royal mother. There, she stays inside for the rest of her life unless there’s a need to populate a new swarm, in which case, she would have to leave.

Laying eggs is the queen bee’s biggest responsibility, and she’s extremely good at it. She can lay more than her body weight in eggs every day during a healthy, productive season. She also knows to lay one egg in every cell, giving her brood plenty of room to grow and mature.

Because of her mating flight, a queen bee spreads genetic diversity to her colony as she fertilizes eggs with sperm from other colonies’ drones.

This genetic diversity keeps a hive strong and resilient, increasing its chances of survival through harsh seasons or other hardships.

Now that we know where a queen bee comes from and what her biggest role is, it’s time to look at the daily life of a honey bee queen.

What do queen bees do under special circumstances? What other duties do they have?

No matter the time of year, a queen’s life looks different than that of the rest of the hive.

Worker bees have different roles in the hive; some spend their days attending to the queen.

The queen bee is constantly surrounded by a group of worker bees who feed, groom, and care for her. They even digest her food for her since a queen bee lacks the digestive glands necessary to process her own food.

Without this royal treatment, the queen could not take care of herself and would eventually die. 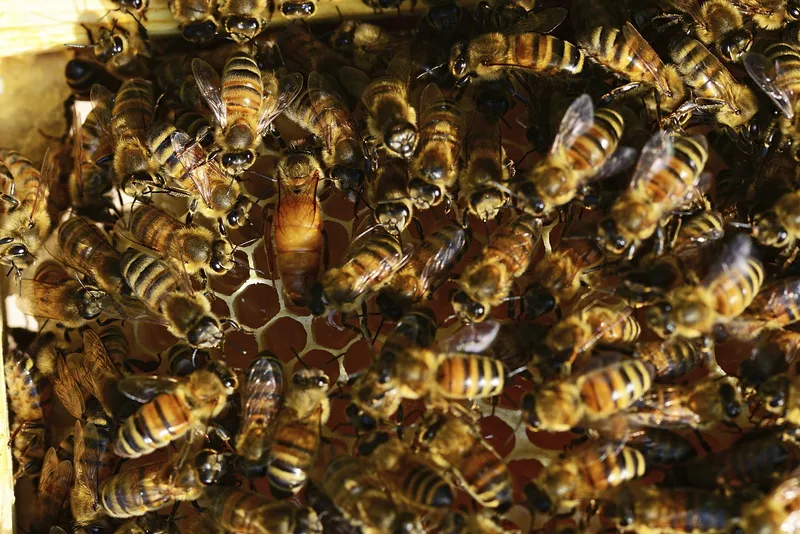 Apart from reproduction, the queen also plays a part in the temperament and behavior of the colony.

Queen bees release a unique pheromone—the chemical signal bees use to communicate with each other.

The unique chemical scents of the queen bee pheromones let the colony know she’s alive and healthy, keeping them comfortable and motivated to keep working.

A few special circumstances may occur during a queen bee’s life. One of them is swarming, or when a colony gets too big for its hive. As a result, worker bees will start the process of raising a new queen.

When the new queen hatches, the old queen will form a swarm with half the population and leave to establish a new colony.

Meanwhile, the newly hatched queen bee will stay in the original hive, maintaining the remaining half of the colony.

How does a bee become a queen?

If a queen starts faltering in her duties—perhaps due to old age or other circumstances—the colony will decide to replace her.

Nurse bees raise a new queen. When she hatches, she takes over the colony, and the workers get rid of the old, unproductive queen.

What Does Killing a Queen Bee Do?

Losing a queen bee prematurely is one of the main reasons colonies die. Without her, no new workers will be raised to replace the old ones as they reach the end of their life cycle.

If the hive loses its queen and fails to replace her, the colony population will continue to decline and disappear in a few months.

If for some reason, the queen bee suddenly dies, the workers will take notice within a few hours.

Queen bees release unique chemical scents that are vital to the hive. When the workers fail to detect her scent, they become stressed and agitated. However, they will act quickly to replace the former queen. Worker bees then start the process of raising a new queen

Honey bee queens play an invaluable role in the hive, and their absence threatens the long-term survival of the entire colony. They maintain a thriving population that sustains the colony through different seasons and release important pheromones to regulate the unity within the hive.

Queen bees are one reason beekeepers are passionate about their colonies.

Mann Lake can help you learn more about bees and their colonies, buy quality queen bees and bee equipment, and start your own journey as a beekeeper.