Most people can’t tell the difference between a honey bee and a yellow jacket bee. However, it pays to know the distinction if you’re raising a honey bee farm. From their characteristic behaviors and sting to their general behavior and ecological function, honey bees and yellow jackets vary in more ways than one.

What Are Honey Bees?

Honey bees belong to the Apidae family. They represent all bee species that make honey. You can easily distinguish honey bees as black and yellow flying insects living in woodlands, orchards, gardens, and other areas where flowering plants grow.

However, honey bees look stouter and rounder than their wasp fellows, and they have fuzzy bodies to help collect the pollen from the flowers.

Like yellow jacket bees, honey bees are social insects that work in a coordinated manner to maintain their nest or hive.

A honey bee’s lifespan differs according to its caste. Queen bees can live up to two years or more, whereas workers only live between 15 and 200 days, depending on the season. Drone bees live an average of 55 days. 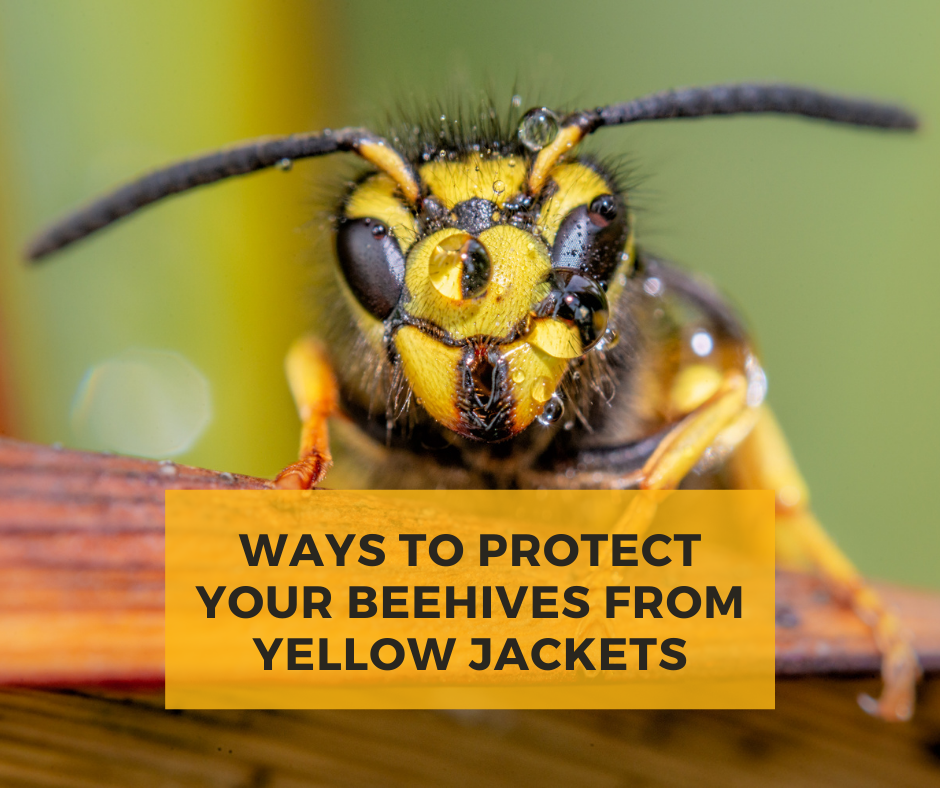 What Are Yellow Jackets?

Yellow jackets belong to the wasp and hornet family called Vespidae. They’re social insects that build nests much like honey bees do. You can often find their nests in holes in the ground or sheltered areas, such as shrubs, trees, and gaps in walls or other structures.

Like honey bees, yellow jacket bees are black and yellow flying insects. However, their brighter colors and thin waists set them apart from bees and other similar insects.

Yellow jackets also have annual life cycles. Colonies will start in the spring when overwintered queens emerge and build nests. The colony thrives throughout the summer as the queen produces more and more generations of workers.

Although both insects look identical at first glance, many key differences distinguish them from the other.

Both honey bees and yellow jacket bees have yellow and black coloring. However, the yellow on a yellow jacket is brighter compared to the amber-colored tone on honey bees. Yellow jackets have the signature pinched waist that is typical among wasps. Meanwhile, honey bees are fatter.

Yellow jackets are hairless, while honey bees look fuzzy for their hair-covered bodies, which help collect pollen from one plant to another. A honey bee’s antennae are bent while a yellow jacket’s are straight.

Typically, you can find a honey bee nest in hidden places. Colonies can also reside in bee boxes and have no qualms about reusing hives. Meanwhile, yellow jackets usually make their nests underground in voids and holes or high places. One honey bee colony can be home to 60,000 bees or more, while a big yellow jacket nest can be home to up to thousands.

Both yellowjacket colonies and honey bee hives consist of a queen, workers, and drones. There’s not much difference in their roles. However, the queen of a yellow jacket colony can easily start a new colony of her own without the assistance of the workers. On the contrary, honey bee queens depend on their worker bees to live and start a new swarm.

Honey bees live on nectar that they collect from flowering plants. Their mouthpieces are specialized for extracting nectar from a flower. On the other hand, yellow jackets, aside from having an appetite for sugary foods, also feast on fruits and meat. Yes, they eat nectar but also flies and honey bees. 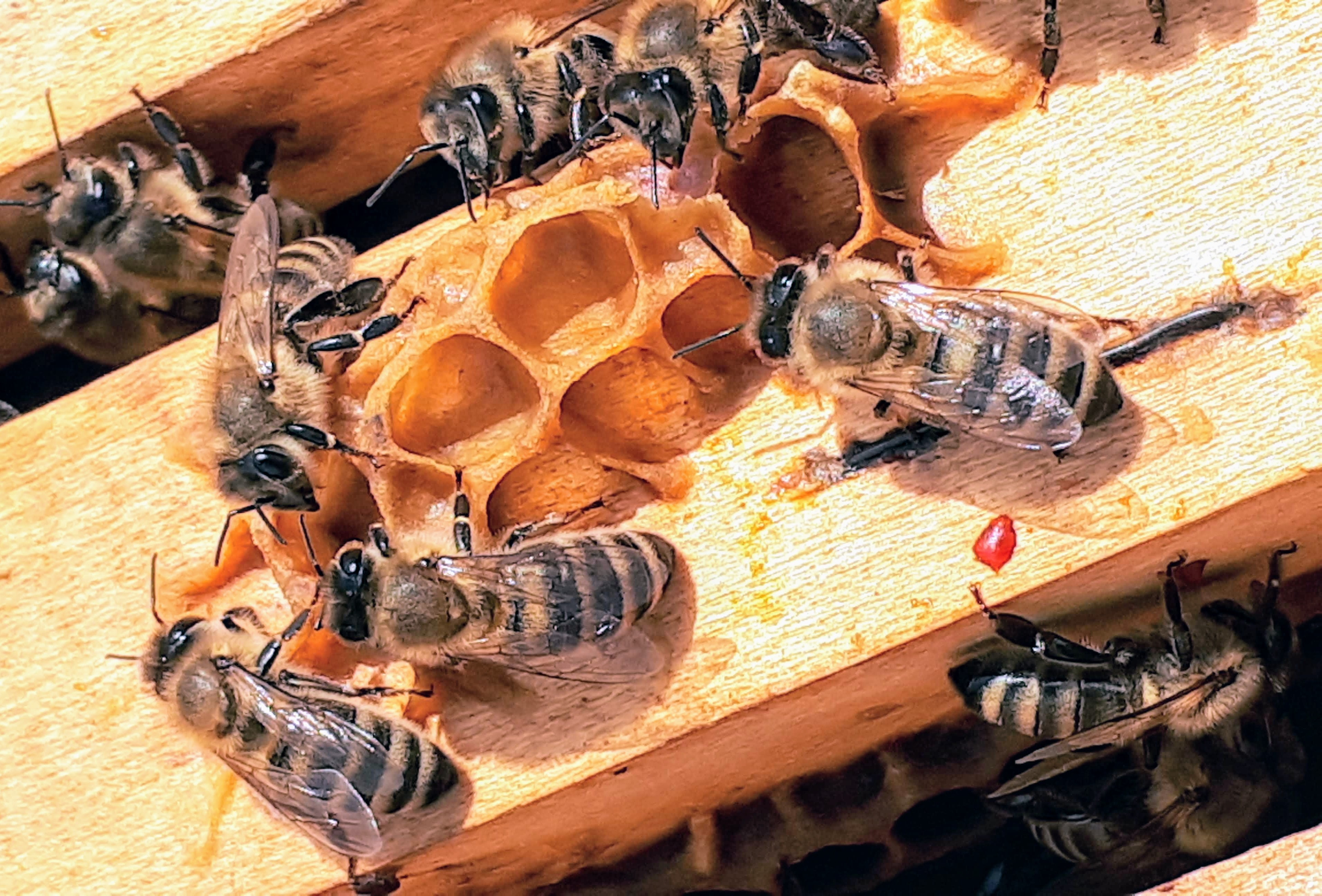 Honey bees and yellow jacket bees are both stinging insects. However, they attack for completely different reasons. Honey bees sting if they feel threatened. They sting only once as the act pulls part of their abdomen, muscles, and digestive draft resulting in the honey bee’s death.

Meanwhile, aggressive yellow jackets can sting if they are disturbed. They also bite, resulting in painful attacks. Unlike the honey bees who die after stinging, yellow jacket bees can sting multiple times.

Agriculturally, bees are some of the most important animals on the planet. The commercial production of about 90 types of crops depends on bees as primary pollinators. Yellow jackets serve as helpful predators, although you don’t normally want them near your house or barn.

Protecting Your Beehives from Yellow Jackets

We love honey bees because of the sweet, golden honey they produce, but we’re not the only ones. Honey and other hive products attract many natural pests and predators, including the yellow jacket.

Yellow jackets can prove devastating for unprepared honey bee hives. They can raid a honey bee colony, killing many honey bees and destroying valuable hive resources in the process. This is why many beekeepers dread the arrival of yellow jacket populations in the summer.

These stinging insects are a valuable part of the ecosystem, but the havoc they wreak on apiaries can cause a lot of stress and sorrow for honey bees and their keepers.

Why Are Yellow Jackets a Threat?

Like many insects in the wasp and hornet family, yellow jackets are aggressive, predatory creatures. They can locate a honey bee hive using their sense of smell, either through the scent of honey or the pheromones the bees produce. They often leave honey bees alone when there’s plenty of food, but they’ll rob honey bee hives and other locations when resources are scarce. 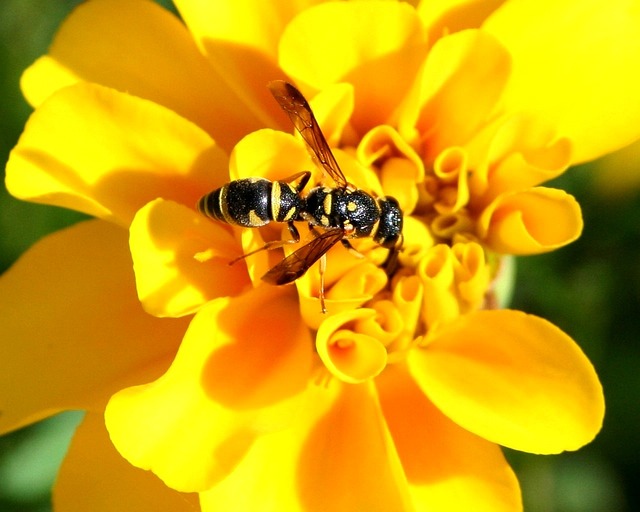 Yellow jackets prey on other insects as sources of protein. If they attack a beehive, they’ll kill the worker bees and eat the brood. They’ll also destroy and eat the honeycomb.

A yellow jacket raid might even kill the honey bee queen.

All in all, these stinging insects’ attack leaves honey bee hives in disarray with no brood, less honey, and fewer workers to pick up the pieces of the colony. This usually means the remaining honey bees will abandon the hive in search of a new home, leaving you down a colony.

Fortunately, there are ways to ward off the threat. Learn how to keep your colonies safe with these ways to protect your beehives from yellow jackets.

4 Ways to Protect Your Beehives from Yellow Jackets

Beekeepers play an important role in keeping their colonies safe. Preventative measures include safeguarding the hive; building a strong, healthy colony; and locating and eliminating threatening yellow jacket nests before they can destroy your hives.

Keep in mind that yellow jackets are still important parts of the ecosystem. If they’re far from your hives or small enough not to pose a threat, it’s best to leave them alone.

However, if yellow jackets are a danger to your apiary, here are a few ways to take care of them:

If you can keep yellow jackets out of your hive, they can’t destroy honeycomb or attack the brood. Guard bees already help with this endeavor by warding off intruders that wander too close.

You can aid your honey bees by reducing hive entrances, making it harder for yellow jackets to get in the beehives. You should also evaluate your hive’s condition during inspections.

Make sure there aren’t any holes or other damage large enough for yellow jackets to crawl through. As you fortify your hive, clear out dead honey bees around the entrance. 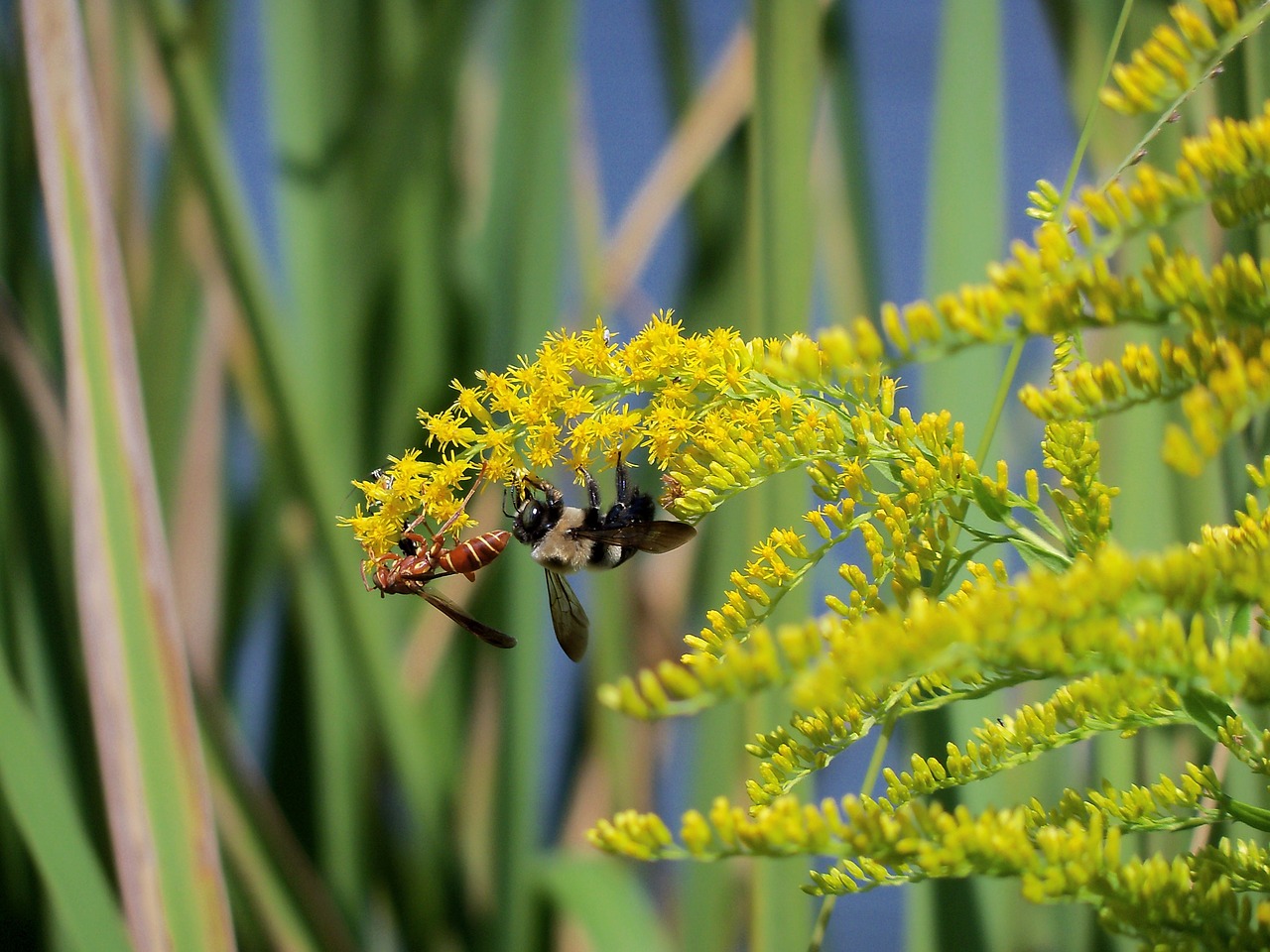 If nearby yellow jackets notice dead honey bees around the hive, they might take it as a sign the hive is weak enough to attack.

To do this, place traps in early spring, when the queen is out foraging for her young nest. You have a few options. One way is to set up poison bait traps by mixing a low-concentration insecticide in meat or fish baits. This lures yellow jackets into the trap, where they take the contaminated bait and bring it back to their nest.

The insecticide then works its way through the population. Other options are available if you don’t want to use insecticide traps. Drowning or freezing are both effective ways to kill trapped yellow jackets.

No matter what trap you use, check and clean it regularly to ensure it remains effective.

You can also take direct action to ward off nearby yellow jackets by hunting the yellowjacket colonies first. Once you locate the threatening nest, you can destroy its residents by sealing them in or pouring boiling or soapy water into the nest.

Be careful when attacking a big yellow jacket nest. It’s best to approach at night when most insects are inside the hive. Yellow jackets are also calmer at night.

That said, be sure to approach carefully. Try not to carry a light when you get close to the nest, as this will attract aggressive yellow jackets.

You can also contact a local professional to safely take care of the yellow jacket nest for you. 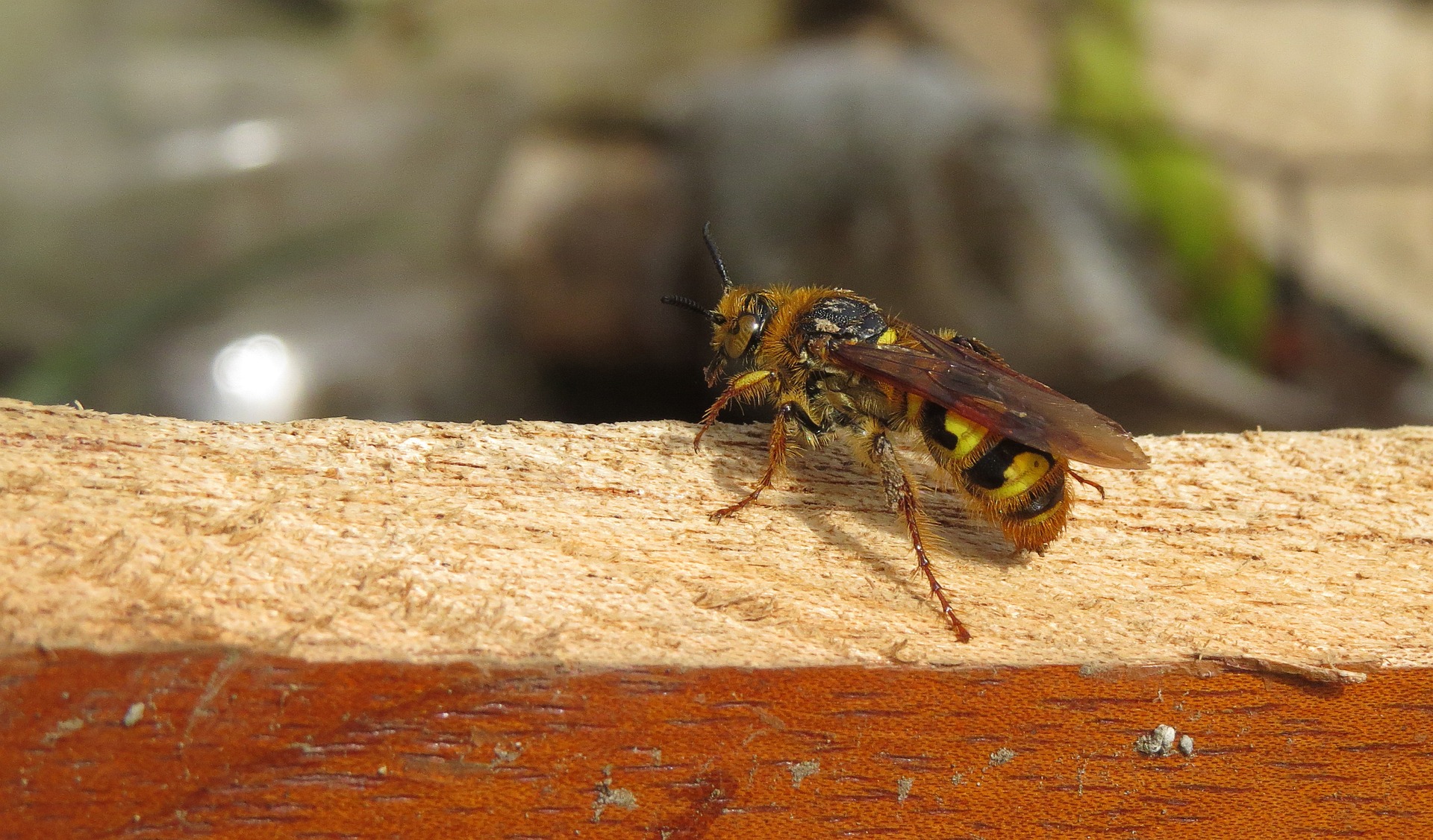 Your honey bees have a better chance of defending themselves from yellow jackets as long as the colony is thriving. Simple hive maintenance, such as regular inspections and quick action against pests or diseases can keep your honey bees strong.

When your hive has a healthy population and abundant resources, they have a better chance of warding off attacks from local yellow jackets and other natural threats.

Make sure you have the right beehive equipment and other beekeeping supplies to help your colony thrive throughout the season.