A highly effective treatment strategy for the management of Varroa mites in honeybee colonies is the use of Oxyalic Acid Vaporizers. The two application methods available to beekeepers that use this mite control strategy are vaporization and fogging. The most desired approach is vaporization since it makes sure that the acid has reached every part of the beehive, even the uncapped cells.

For the majority of beekeepers, being acutely aware of mites in the hive is a top priority. The mite load may be measured in a variety of ways but the issue of how and when to treat mites has taken up the beekeeper's time.  The use of oxalic acid has been one of the most well-liked therapies in recent years. Many beekeepers also prefer this course of therapy. 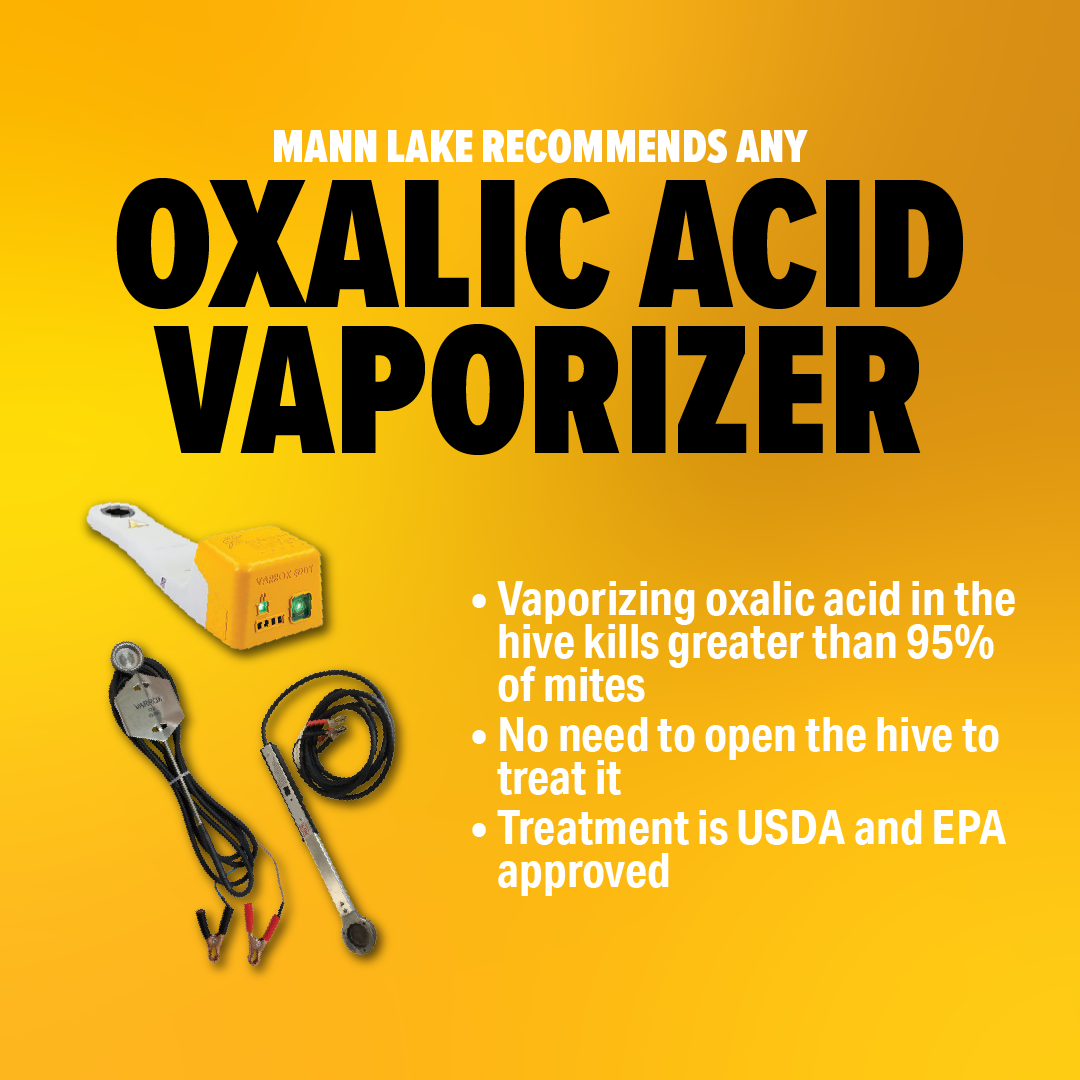 What is oxalic acid?

Much of the debate around the use of treatments by beekeepers focuses on the use of harsh chemicals in the hive. Indeed, some commonly used treatments are based on unnatural chemicals and any beekeeper following natural beekeeping principles will likely have an aversion against such treatments.

Oxalic acid, however, is entirely natural. It is an organic compound found in nature within many plants, including vegetables, leafy greens, fruits, nuts, seeds and more. Herbivores find oxalic acid repellent, which is a handy property if you are a plant!

Chemically, the oxalic acid molecule is comprised of two carbon, two hydrogen and four oxygen atoms. It is a colorless solid that dissolves to form a colorless solution in water. It has many practical uses beyond beekeeping, including as a cleaning or bleaching agent and is often used to clean minerals.

Why is oxalic acid of interest to beekeepers?

It has been shown to be a direct and effective treatment for Varroa mites and has been used for this purpose in Europe and Canada for many years. It was only approved for use in beehives in the US in 2015.

How does it work?

Truth be told, it's not entirely understood why oxalic acid is so effective in treating Varroa. But the most popular theory is that it enters the mite through its feet and then moves into the bloodstream. From that point the mite is a goner! Meanwhile, bees don't have a particularly adverse reaction to the correct application of oxalic acid. We should qualify the statement above somewhat. Any treatment applied indiscriminately can harm your bees and this is certainly true with oxalic acid. The approved use of oxalic acid in the hive - using the documented procedures and cautions - will be just fine. But don't deviate from that, since overuse can indeed be harmful to your bees.

You need to be careful around oxalic acid. It is irritating to the eyes, mouth and skin. In short, protect your eyes and your hands, at least. Wear a filtered mask with a respirator. Respirators Half Face With Filters is a great choice.

Avoid use during the honey flow. Another important note! Remove honey supers before applying oxalic acid and allow at least 14 days before putting them back, so that acid is cleansed from the hive, thus avoiding honey contamination.

An oxalic acid dihydrate treatment with the evaporator is not only gentle for bees, but it is also safe for the user. Place this device under the beehive and start the treatment with a single push of a button. Then walk away from the beehive until the end of the treatment. Thanks to the LED lights, it is possible to monitor the progress from a distance. When it's complete, it signals you with extra bright lights. A great treatment for pesky mites!

Varrox Eddy is the first and only vaporizer that vaporizes with an attached included battery! The first oxalic acid evaporator with Li-Ion technology. No more towing of power generators or heavy car batteries. Varrox Eddy is lightweight, handy and weighs less than 1.3 lbs including the battery. A single key press on the device is enough to start the treatment. With a fully charged battery, you can treat up to 15 hives! The full battery charging time is a maximum of 4 hours. The Eddy requires an opening of at least 6th tenth of an inch high and 3.54 inches wide. Well within most hive openings.

Application:
Treatments with oxalic acid dihydrate are best in a brood-free state. Vaporization is great to use after catching a swarm as there is no brood and you start with a mite free hive! DC907 Simply load the proper amount of OA into the cup of the Varrox Eddy and slide it into the entrance. Seal the open parts of the entrance with a damp cloth or foam strip and start the device at the touch of a button. The treatment time and temperature are electronically controlled by the device and stopped as soon as the filled amount has vaporized.

To speed up the treatment, when the light flashes white, remove the Eddy, turn the Eddy upside down to release the used pan and replace it with an OA filled one. This helps dissipate the heat and readies the Eddy for insertion into the next hive. Seal the hive and as soon as the lights are green, start the next treatment. Just follow the lights and push buttons! It does not get any simpler.

This is the one for you if you have more than 10 hives or simply want the best. Because the pan is composed of stainless steel, heat can be transferred evenly and in a regulated manner, preventing oxalic acid from overheating. Overheated oxalic acid degrades and produces formic acid and CO2, drastically decreasing its potency. Oxalic acid is vaporized in beehives, which is a tried-and-true way of eliminating both Varroa and Tracheal mites.

The "side" wings on this vaporizer prevent it from tipping over while it is in the hive. Fill the vaporizer's cup with one gram (each brood chamber) of oxalic acid (wood bleach). Insert it in the hive and connect it to any 12 volt vehicle battery (found in the Savogran-labeled section of the store). In 2 1/2 minutes, the vaporization will be finished. You're done when you unplug the vaporizer and give it one more minute in the hive to lock in the vapors. You're ready for your next hive once you remove it from the hive and DUNK it in a pail of water (you don't have to use a wet towel or sponge, but you may)! After treatment, if any residue is still present in the cup, scrape it out with a stick or another blunt instrument. To keep the vapors within the hive after removing the vaporizer, don't forget to seal it for ten minutes. Foam cut into bits works nicely. Only the mites on the bees (phoretic), not the ones in the brood, should be eliminated. In the late fall or early winter, when the hive is practically broodless, is a great time to treat. You can safely evaporate if the outdoor temperature is 40 degrees (f) or higher. As famine and mites are the leading causes of winter losses, you want to enter winter with mite-free hives!

To treat in the summer, you must complete four successive treatments, five days apart to vaporize the mites that are emerging in the brood. If you’ve supers on, you must also remove or place a barrier between your supers and brood nest. You can use coroplast (plastic sign material) plywood or cardboard as a barrier. You can replace the supers or remove the barrier 3 hours after treating. With a little electrical ingenuity, you can connect several vaporizers to treat multiple hives at the same time. In the summer, we open drone brood to decide whether to treat. If the open drone brood contains mites, we treat.