Varroa mites (Varroa destructor and Varroa jacobsoni) are parasites of adult honey bees and broods. They can weaken the bees or transmit honey bee viruses when left ignored. Worse, the bees end up getting killed in the process. They are a major problem for commercial or hobby beekeepers, so it’s important to learn about these parasites, how to get rid of them, and how to prevent them from infesting hives.

Apivar® is one of the industry-leading preventions and treatments for varroa mite infestations in honey bee colonies. It is safe and highly effective in keeping mite numbers low in hives and therefore maintains healthier, longer-living bees.

What Are Varroa Mites?

You can see varroa mites with your naked eye. Adult female mites are larger than males, measuring about 1.1 mm long and 1.7 mm wide. They’re also reddish-brown, unlike the yellowish-white males. Meanwhile, varroa eggs are round and milky-colored, measuring around 1.00 mm long and 1.5 mm wide.

Although varroa mites feed and live on honey bees, their main food source is the larvae and pupae found in the developing brood. This causes malformation and weakening of the honey bees, manifesting in crippled bees, impaired flight, and decreased returns to the colony after foraging.

Varroa mites are very mobile, which is why they can easily transfer between adult bees. They spread between apiaries and colonies when infested broods and bees are interchanged during day-to-day apiary management. This occurs when transporting hives, queen bees, and used beekeeping equipment.

Varroa spread may also happen during foraging bees and swarms. Mites can move from the bee to a flower and then stick to another bee visiting that same flower. When the infected bee returns to the colony, the mite can start feeding and infesting the entire hive.

How Do You Get Rid of Varroa Mites?

If you suspect a varroa infestation in your apiary, consider taking the following steps to reduce its spread:

There are several cultural approaches that aim to reduce the reproduction of mites, which include the following:

Using mite-resistant bees for varroa mite control can help minimize the reliance on chemicals. For instance, Russian bees have shown a slower mite population increase than other bees. Varroa-sensitive hygiene (VSH) bees tend to remove dead brood quickly and may also do well at removing mites from the hive.

This approach stems from research suggesting that mite numbers decrease the smaller the cell size. This is because fewer varroa mites are reproduced in smaller hexagons than in bigger ones. With this, it may be worth trying to produce a commercial foundation with smaller hexagons to limit varroa mites’ growth.

Brood break is done by removing the queen bee from a colony for about three weeks. This allows all broods to hatch, forcing the mites out of the cells and onto adult honey bees. Without the brood to care for, adult bees are forced to be more hygienic, lessening mite numbers in the colony. This method can be done simultaneously with chemical methods to increase the chances of success.

Manipulating the colony or hive can impact varroa mite populations, especially if done in conjunction with other methods. Below are some of the most popular mechanical approaches to consider:

Varroa mites have shown higher reproductive rates in drone broods since their post-capping period allows them to produce 2.2 to 2.6 offspring in drone cells compared to only 1.3 to 1.4 offspring in worker cells. Since mites prefer drone broods for reproduction, you can use this to trap and eliminate them.

Adding a drone comb and removing it before drone emergence is an effective way to remove varroa mites breeding in the cells.

Instead of using solid wood boards, you may use screened bottom ones to allow mites to naturally fall to the ground during bee movement or grooming behavior. Instead of falling on a solid board where they can climb back up to the bees, mites will fall through a screen board to the ground and are less likely to return to the colony. This physical method is best used simultaneously with other pest control methods.

Applying powdered sugar on bees can increase grooming behavior among bees, resulting in more mites falling off them and onto bottom boards. This method can be labor intensive, so it’s best to consider its pros and cons before implementation.

It’s best to apply chemical miticide before the production of winter bees to achieve the best overwintering success. The chemicals used are categorized into two:

Soft chemicals are naturally derived, so they don’t leave chemical residues in hives. Because of this, they’re best used first before considering applying hard chemicals. Some commonly used soft chemicals for the treatment of mite formation are formic acid, oxalic acid, hops beta acids, and thymol.

Synthetic miticides are typically used to kill up to 95% of the varroa population. Fluvalinate and coumaphos are two widely used mite treatments but are known to have decreased effectivity as mites have developed resistance. These chemicals leave harmful resides in wax, making bees more prone to nosema disease.

Amitraz, the most popular synthetic acaricide, does not contaminate honey or wax in its original form, being a safer alternative for controlling varroa mites. 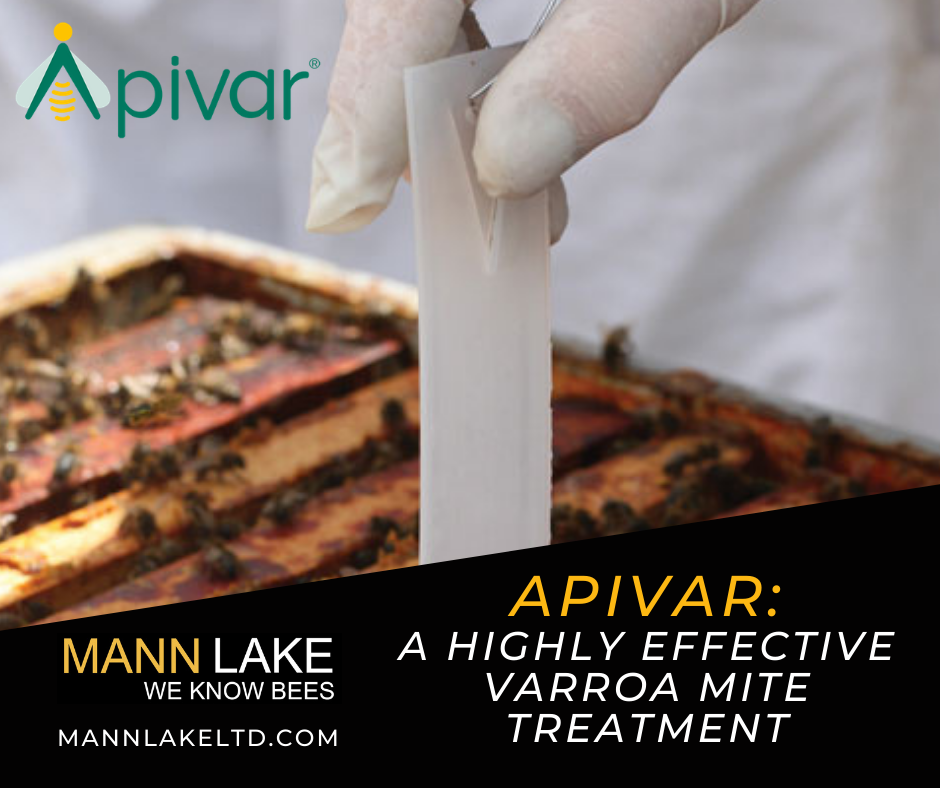 Apivar is an Amitraz-laced polymer strip used in the treatment of varroa mites. Amitraz paralyzes varroa mites and causes them to detach from the host honey bee. This causes the mite to die of starvation at the bottom of the hive.

The polymer strip application is important because it regulates the release of the Amitraz and is durable enough to withstand the six- to eight-treatment period. The six- to eight-week treatment course ensures that several cycles of varroa mite emergence are covered. This leads to Apivar’s extremely high efficacy rate—up to 99%!

Not only is it a highly effective varroa mite treatment, but it is also safe for your bees! Apivar leaves no residue in the hive and is safe for both brood and bees when used properly in the hives.

Applying two strips of Apiver per brood chamber is enough to control mites in a hive, requiring less time and effort to treat your bees. Doing so also lessens the chances of disrupting the bees compared to other treatments.

Each Apivar strip consists of two components: Amitraz (the active ingredient) and the polymer strip used to constantly deliver the substance to the honey bees even after it is placed in the hive. So how does it work? The active ingredient is spread throughout the colony as bees pick up its molecules when they walk on the strip’s surface.

Apivar is best used as a spring and fall treatment. Use in the spring before adding any honey supers to your hive. Fall treatment should be after honey supers have been pulled from the hive.

It’s especially important to treat your hive in the fall, as varroa mites can weaken winter bees and affect the survivability of the colony. Consider adding Pro Winter Patties to aid in the winter survivability rate of your colonies. Do not use Apivar when honey supers are in the hive.

Where Can I Purchase Apivar?

Mann Lake is an Apivar-approved retailer. Apivar is available conveniently in 4-pack, 12-pack, and 60-pack variants for whatever your beeyard needs are. Try it today; your bees will thank you!

Apivar is simple to use and highly effective. Click the button below to view Apivar’s instructions for use.